The recently released Fourth U.S. National Climate Assessment (NCA) has received a great deal of attention due to the severity of climate change impacts the report portrays. The NCA and the IPCC’s recently released 1.5 Degrees Special Report together have been widely characterized as portraying a climate change state of emergency. Some observers have gone further, suggesting that the reports underestimate the true nature of climate risk. As one New York Magazine headline blares: “UN Says Climate Genocide Coming. But It’s Worse Than That.”

My reference to catastrophic messaging in the title above, however does not refer to the NCA characterizing climate change as a catastrophe. Rather, I am referring to the unfortunate fact that amidst all the excellent analysis and data present in the NCA, the report concludes on a note of profound cognitive dissonance that undermines the rest of the report.

You may have already seen this in a recent Wall Street Journal (WSJ) editorial under the headline “A worst-case scenario projects annual GDP growth will be slower by 0.05 percentage point.” The editorial was written by Steven Koonin, the former undersecretary of energy for science in the first term of the Obama Administration. Note that the number in the headline is not 5% — it’s 5/100ths of 1%. Hence, the cognitive dissonance that will lead many people to conclude that climate change can’t possibly be a catastrophe if it has almost no impact on the U.S. economy!

How did Koonin arrive at the seemingly outrageous conclusion that climate change will have basically no impact on the U.S. economy? A conclusion he put in front of millions of business executives in the U.S. via his WSJ editorial? Well, he lays it out very clearly:

“The report’s numbers, uncertain as they are, turn out not to be all that alarming. The final figure of the final chapter shows that an increase in global average temperatures of 9 degrees Fahrenheit (beyond the 1.4-degree rise already recorded since 1880) would directly reduce the U.S. gross domestic product in 2090 by 4%, plus or minus 2%—that is, the GDP would be about 4% less than it would have been absent human influences on the climate. That “worst-worst case” estimate assumes the largest plausible temperature rise and only known modes of adaptation.

To place a 4% reduction in context, conservatively assume that real annual GDP growth will average 2% in the coming decades (it has averaged 3.2% since 1935 and is currently 3%). That would result in a U.S. economy roughly four times as large in 2090 as today. A 4% climate impact would reduce that multiple to 3.8—a correction much smaller than the uncertainty of any projection over seven decades. To put it another way, the projected reduction in the average annual growth rate is a mere 0.05 percentage point. The U.S. economy in 2090 would be no more than two years behind where it would have been absent man-caused climate change.”

Wait … he’s saying the NCA itself served the numbers up on a silver platter? Koonin simply did some math based on numbers from the report itself? 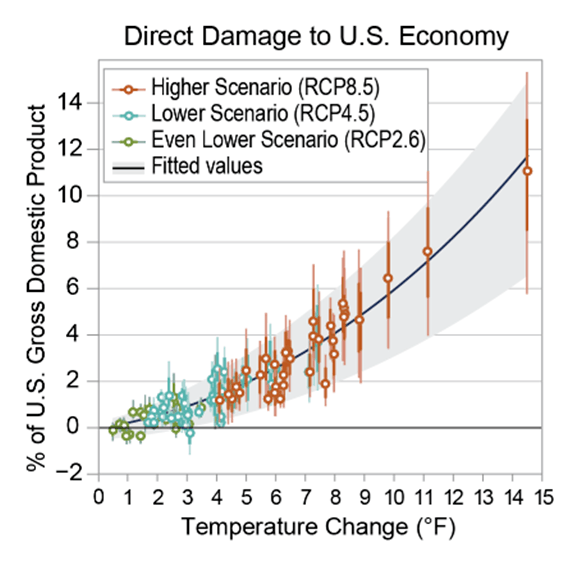 Well … yes. You can see the graph he refers to at right, showing the forecasted GDP loss per 1 degree Fahrenheit of global temperature change. As Koonin notes, all of these GDP impacts are against future GDP, not today’s GDP. So while the graph goes as high as 14% at its most extreme, that’s 14% against an economy assumed to be several times as large as today’s economy.

Koonin doesn’t mention it because it would complicate his editorial, but the situation is even more ambiguous than he suggests. As shown in the second graphic below (from the NCA’s final chapter), transitioning from a business-as-usual emissions trajectory (RCP8.5) to a much lower emissions trajectory (RCP4.5) is estimated to avoid only a fraction of the economic impacts of climate change. In the case of Coastal Property, such a transition would avoid only 22% of economic impacts. For Inland Flooding the estimate is 47%. Other sectors are higher, sometimes puzzlingly so, including Inland Water Recreation (107% of impacts avoided), and Wildfire (134% of impacts avoided).

In effect, the NCA can reasonably be characterized as concluding that not only is climate largely irrelevant to economic growth, but that it’s too late to do much about some of the key economic impacts of climate change.

Surely, you might think, the report includes huge caveats around these numbers, including:

These and other potential caveats are not obvious in the report. Most of them are not even obvious in the literature cited by the report, specifically Hsiang et al.’s 2017 paper, “Estimating Economic Damage from Climate Change in the United States.”

Does Koonin’s editorial invalidate the scientific validity of the National Climate Assessment or the conclusion that climate change is an emergency? Of course not. Does Koonin’s editorial invalidate the value of research like that reflected in Hsiang’s 2017 paper? No. But Koonin’s editorial points to a failure to think about the importance and impacts of cognitive dissonance in how information is presented in reports like the NCA, and provides an understandable psychological basis for why people coming to the climate change topic through an “economic frame” might dismiss the report as environmental hyperbole. This is hardly the first time that this has happened, which simply reinforces the fact that this could and should have been avoided by more careful messaging of what is a very complicated topic.