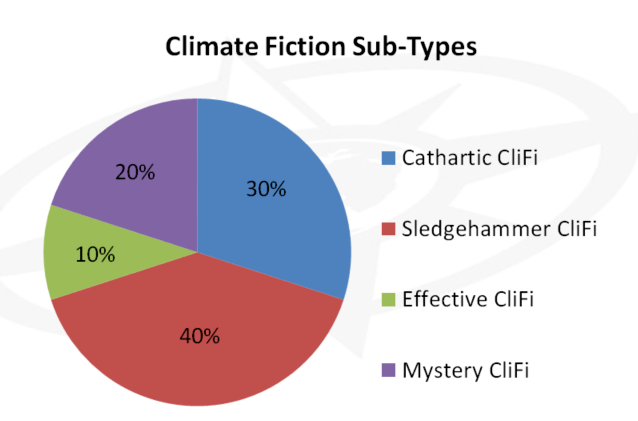 I’ve been following the evolving Climate Fiction (CliFi) genre for several years. But what IS CliFi? I suspected we were in trouble when the media began referring to the recent movie remake of Godzilla as a CliFi movie (for reasons I’ve never figured out). In other cases, it seems all it takes is mention of the words “global warming” for a novel to be called CliFi.

Now Amazon has entered the field, recently releasing its Warmer Collection series of CliFi books. The seven books are relatively short, ranging from just over 30 minutes to about 2 hours in the audio format. I’ve listened to all of them. So where are we, some five years into the CliFi genre?

I don’t claim to have the right answer to these questions. But I will say that I come to CliFi primarily out of my interest in communicating climate change. As a result, I tend to ask whether CliFi books are likely to engage readers in thinking about global warming in new ways. And that’s the frame I define as “effective” below.

What are some different sub-genres of CliFi? How are they represented in the larger CliFi literature? One way to categorize CliFi is: CliFi as catharsis, CliFi as apocalyptic sledgehammer, CliFi as effective communications tool, and CliFi as something else entirely (like in the movie Godzilla). My admittedly arbitrary effort to quantify these categories is: I would argue that 6 of the 7 Amazon Warmer Collection CliFi books fall into the Sledgehammer category. While apocalyptic fiction is certainly a form of communication, it is hard to imagine a sledgehammer approach to communicating global warming as being very effective with audiences unfamiliar with or skeptical of the topic.

I’ll be the first person to note that different readers can have totally different reactions to a specific CliFi work. With the entry of a player like Amazon onto the CliFi playing field, though, it’s a good time to take stock. My bottom line is that “Climate Fiction” doesn’t have a particular meaning or purpose today. This makes it hard to get the “right CliFi” to the “right reader,” and diminishes the impact of CliFi as a chess piece on the global Climate Chess game board. We need to be much clearer about what we mean by CliFi, or assign new terms to specific categories of CliFi. Climate Fiction is Dead! Long Live Climate Fiction!

Leave me a comment below with your thoughts. I'm really interested to hear what people think about cli-fi and its effectiveness as a communication tool!